The Apple SKAdNetwork is an attribution framework designed for mobile app install attribution on iOS 14. Apple itself controls the attribution post back in this framework and limits the data provided in the post back event. The most important aspect of this framework is that customers will not be able to tie the impression (auction ID) back to the original user who clicked on the ad and installed your app, which will limit an advertiser’s ability to optimize performance campaigns for iOS. Beeswax has adapted its reporting and attribution products to accommodate for these changes.

SKAdNetwork is only applicable if you are running mobile app install campaigns on iOS 14 and:

In a traditional post back from a Mobile Measurement Provider (MMP), Beeswax receives the following information from the MMP:

As part of the new SKAdNetwork measures from Apple, Beeswax receives less data on the attribution post back:

* Beeswax will only receive conversion values if the number of conversions meets Apple's SKAdnetwork privacy thresholds. Apple has not released any details about what this threshold is, and many ad networks report that very few postbacks include them (Source: Branch).

Apple limits Beeswax (and all advertising platforms) to 100 “SKAdNetwork Campaign IDs” per advertised app bundle. This 1-100 value is the most granular identifier available, and can be used to provide some means of tying a conversion back to a Beeswax line item or creative/line item combination.

How will they be implemented in Beeswax?

Customers will be able to decide on which level they would like to track SKAdNetwork conversions using the following options:

The above options will be set at the Line Item level, allowing you to set SKAdNetwork conversion tracking at the Line Item or Line Item/Creative combination for others. . These Line Items can reside under the same Campaign.

How to setup a SKAdNetwork Campaign in Beeswax

If you are intending to run and track mobile app install campaigns on iOS 14, follow the below steps to set up SKAdNetwork attribution in Beeswax.

If Enable SKAd Tracking is set to YES on the line item, there will be an option to select a SKAd Assignment Level from the below two options:

The Target SKAd-Enabled Supply field is set to YES by default. This ensures that the line item will only buy inventory that is eligible for SKAdNetwork attribution by Beeswax.

A single advertised App Bundle can have up to 20 SKAdNetwork IDs per advertised app per buzz key. However, if you are a direct advertiser and owner of the app in question, you may reserve additional SKAdNetwork IDs--please contact your Beeswax CSM to be enabled for more SKAdNetworkIDs should it be necessary.

How SKAdNetwork Campaign IDs Get “Released”

How can I report on SKAdNetwork attributed conversions?

You can report on SKAdNetwork conversions through the following feeds: 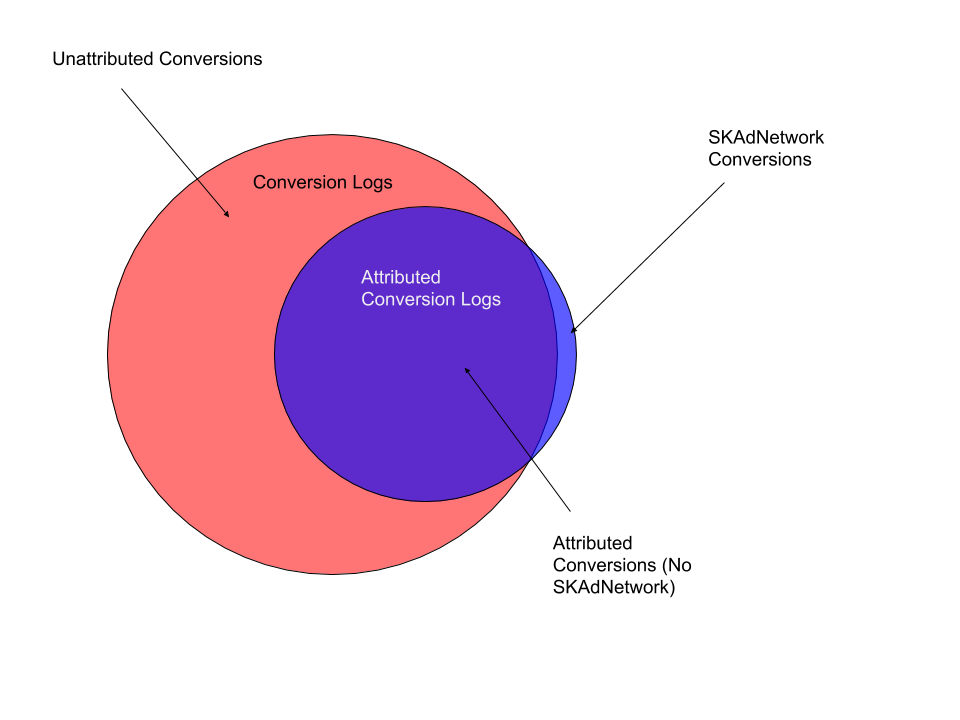 Conversions outside of the SKAdNetwork methodology will be unaffected by these changes.

To help in understanding the scale of the reduction of presence of IDFAs, we have added a new grouping dimension called “ID Present” which will be present on the following Report Types:

This field has 3 possible values:

This new feature allows users to filter or pivot data in Report Builder using ‘ID Present’ as a dimension.

How to Setup MMP SKAD Forwarding

Setting up MMP Forwarding is done on the Advertiser level. There is currently no way to configure SKAD forwarding on a campaign or line item basis. When enabled, all the SKAD Conversions for the given Advertiser will be forwarded to the desired MMP. If you do not see this option available on the Advertiser, please reach out to your Customer Success Manager.

If an Advertiser has "Enable SKAD Tracking" toggled on, you will be able to select an Eligible MMP for SKAD Forwarding from the dropdown: 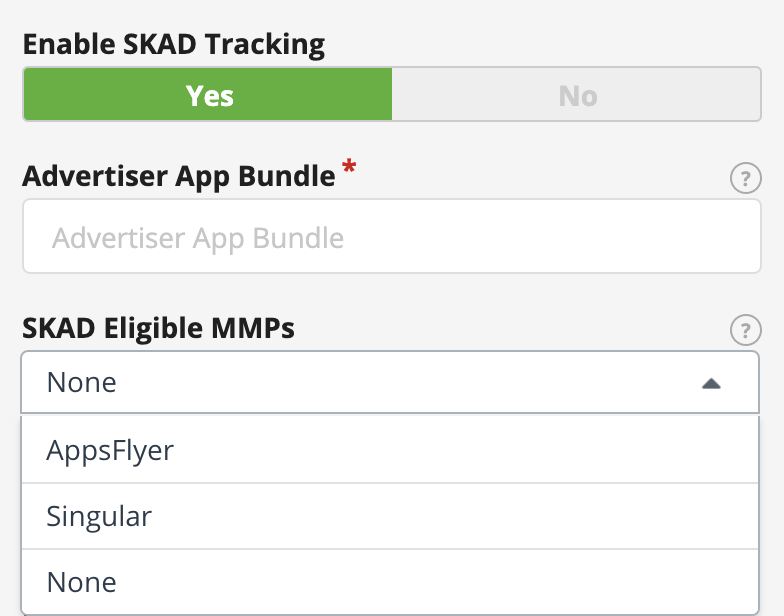 Beeswax currently supports AppsFlyer and Singular as MMP partners. You can opt to forward to one of these MMPs or choose “None”. As more MMPs are added in the future, they will appear here. Note that only one MMP can be selected per Advertiser, but this field can be changed after it is initially set. This setting is also changeable via the API.

Q: How do MMPs work in SKAdNetwork?
A: Each MMP has a slightly different proposal for how to work with SKAdTracking. Beeswax is working with all major MMPs to understand how things may change.

Q: This 20 SkAdNetwork Campaign ID limit seems very limiting, is there any way around it?
A: Apple limits the number of SKAdNetwork Campaign IDs available per buying platform. If you are a direct advertiser and owner of the app in question, you may reserve additional SKAdNetwork IDs--please contact your Beeswax CSM to be enabled for more SKAdNetworkIDs should it be necessary.

Q: What happens if we go over our SKAdNetwork Campaign ID limit?
A: Buzz enforces the limit and will prevent additional Lines or Creative-Line Associations from being made active.

Q: What can someone do with the conversion value field?
A: The value field is being used by many marketers to pass data about post-install activities such as purchases and upgrades. Beeswax is agnostic as to how this value is used, and merely passes it through to the customer in Attributed Conversion Logs. Beeswax will only receive conversion values if the number of conversions meets Apple's SKAdnetwork privacy thresholds. Apple has not released any details about what this threshold is, and many ad networks report that very few postbacks include them (Source: Branch).

Q: How do you decide whether an ID is ‘present’ when referring to the “ID Present” field in Reporting?
A: For the purposes of ‘ID Present’, an impression must have one of the following two IDs present on the bid request:

Q: Is the MMP integration going to be the same for other MMPs?
A: We expect most of the MMPs will be relatively similar. A few have minor differences, but we tentatively anticipate similar data flows and field mapping paradigms.

Q: Will it be possible to backfill historical SKAD conversions to an MMP after we turn on an integration or if we switch the integration to another MMP (in the future)?
A: No.

Q: Does an MMP SKAD Integration replace the existing MMP integration with Beeswax?
A: No, SKAD is complementary. For example, if the user is still opted into IDFA or is on an Android device, Beeswax will still receive postbacks from the MMP in the normal way.

Q: What is the iOS 14.5 adoption rate?
A: According to programmatic community data seen here, there’s roughly a 15% adoption rate as of June 2021. We expect this will continue to rise.

Q: What percent of in-app traffic is Beeswax eligible to sign for SKAdNetwork?
A: Currently about 60% of all traffic coming from our main in-app partners are SKAdNetwork enabled and have Beeswax as an eligible signer. We should expect this to increase as iOS 14.5 is further adopted.

Q: Can this feature be used via the API?
A: Yes. Documentation on applying SKAd Tracking and Targeting via Buzz API can be found here and here.

Did this answer your question? Thanks for the feedback There was a problem submitting your feedback. Please try again later.
Last updated on August 5, 2021